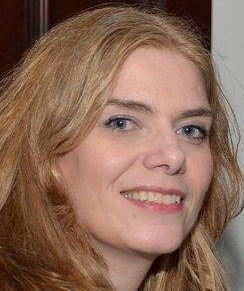 Mrs. Pachoud is a French jurist that has been awarded two prestigious scholarships.

Mrs. Pachoud is a French jurist that has been awarded two prestigious scholarships. On October 23, 2009, she was invited to attend the Wings Club dinner-dance in New York, where she was awarded a Wings Club Scholarship for outstanding academic achievement in the field of aviation. Following that, on October 30, 2009, Rachel Pachoud received the 2009 International Aviation Women's Association (IAWA) scholarship, formally conferred by Mia Wouters, LL.M. '85, of Brussels (right on photo). Ms. Pachoud previously worked in the aviation field in Latin America. She is particularly interested in safety and security matters as well as accident investigations. Her research focus is on flight safety, how to learn from past accidents from independent and reliable investigations, and how improve security without jeopardizing passengers' privacy, civil and other human rights. Mrs. Pachoud was a strategic alliance of SNC Caracas, and ran the office for a period of six months in 2008. She mainly worked on civil aviation matters, and gave some space to maritime and civl law cases. Since then, she has been working as an independent and outsource consultant from Canada.